History of the Mercedes Benz

In 1885 the townspeople of Cannstatt, Germany, were startled to see Paul Daimler, son of Gottlieb Daimler, roll away from No.14 Taubenhausstrasse on a wooden-spoked two-wheeler powered by a fraction of a horsepower four-cycle internal combustion engine. That belt driven motorcycle (actually a four-wheeler as it had two eight-inch diameter outrigger wheels to keep it stable when at a standstill) was the forerunner of all automobiles.

Gottlieb Daimler was the first man to harness with any true degree of success a combustion engine into a road vehicle. Granted there were horseless vehicle predecessors to Daimler's motorcycle but Daimler's was the first recognized internal combustion vehicle and the first to incorporate a practical transmission system.

Shortly after Daimler applied for his combustion motor patent, Carl Benz of Mannheim, Germany was granted a German patent covering a three-wheel motor car he constructed in 1844. This single cylinder, 3/4 hp, benzene fueled motor car had a combination of belts, chains and gears to transmit power to the rubber tired rear wheels but no gear change was possible.

General Motors owns Chevrolet, a great American car manufacturer. W.C. Durant in Detroit, Michigan started the company. The cars produced were first brought out by racecar driver, Louis Chevrolet. He established an automobile for $2150, which were six cylinders and 4.9 litres. The first big car produced on the market was the Baby Grand, which was sold for $875. Electrics were optional on Chevrolets until 1917. With the first real boost in production and innovation cars were sold at a standard price increasing sales to 70,701 from 13,600.
http://web.bryant.edu/~ehu/h364proj/fall_97/lushing/Chevrolet.html

1991
Porsche becomes the first car maker in Germany to equip all production models with an airbag for driver and front passenger as standard equipment.
1993:
At the Detroit Motor Show, Porsche displays the study for a roadster with boxer mid-engine named the Boxster. The totally revised 911 Carrera premieres at the Frankfurt Motor Show.
1995
With Emission Control System OBD II, the 911 Turbo becomes the world’s lowest-emission production car. In addition to the 911 Carrera 4S, the 911 Targa with power glass roof expands the model range. The Porsche 911 GT2, which can also compete in motorsport, is launched in a limited series.
http://www.porsche.com/international/aboutporsche/porschemuseum/historyporschearchive/milestones/ 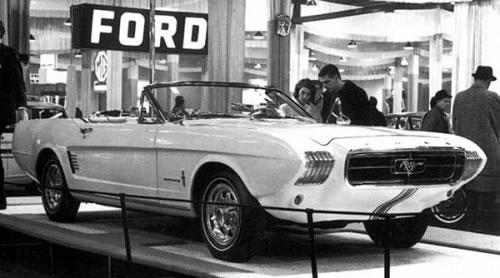 Ford Motor Company is one of the greatest automobile manufacturers of all time. They started under Henry Ford in Detroit, Michigan. Ford had a skill for craftsmanship when he built an experimental car in 1896. It was a twin cylinder engine with potential of 20 mph. In 1899 he left his job in order to organize the Detroit Automobile Company. Ford's first production was in 1903, the Model A, with an under the floor engine selling for $850. In the first season it sold 1,708 cars.
http://web.bryant.edu/~ehu/h364proj/fall_97/lushing/Ford.html